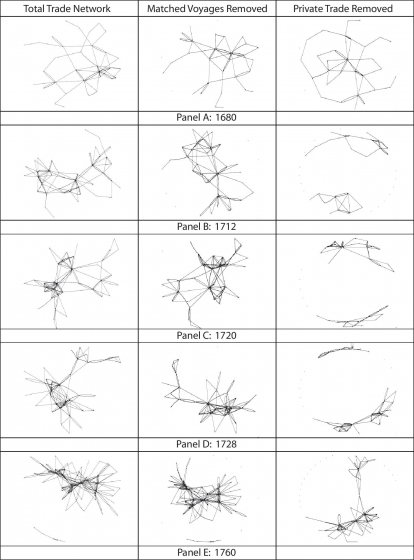 Social networks are fluid and interstitial social objects. When social networks link otherwise distinct social groups, they often fundamentally transform those groups and the societies they are a part of. My research focuses on how networks are implicated in the process by which new institutions emerge and old institutions change shape.

This network image is composed of ships travels between ports between 1680 and 1760. A node represents an eastern port and the link represents the passage of an English East India Company ship from one node to another. The first column represents the complete network. The third column has employees engaged in extensive private trade removed from the graph. The second column is a matched comparison with a similar number of routine voyages removed. The images indicate that extensive employee private trading knit the trade voyages into a cohesive network. Further analyses show that local information was transmitted from ship-to-ship via the links between nodes. Informal communications between captains changed the character of the organization, the structure of global trade in the pre-modern period, and the political relationship between Asia and England.

The English East India Company was one of the most powerful and enduring companies in history. This project, described in the forthcoming book Between Monopoly and Free Trade (Princeton University Press, 2014), locates the source of that success in the innovation and internal cohesion generated through what was initially a cost-saving measure, in which the court granted employees the right to pursue their own commercial interests while in the employ of the firm.

Though the Company held a monopoly on English overseas trade to Asia, the Court of Directors extended the right to trade within Asia to the company’s employees, creating an unusual situation in which employees both worked for themselves and for the Company as overseas merchants. Building on the organizational infrastructure of the English East India Company and the institutional base of the rich and sophisticated market of the East, the employees built a cohesive internal network of peer communications, i.e. a social network, that was used to direct English trading ships during their voyages. This network integrated Company operations, encouraged innovation, and increased the Company’s flexibility, adaptability, and responsiveness to local circumstance.

Networks help to provide an answer to the historical puzzle of why the English East India Company was such a singularly dynamic force in the expansion of trade between Europe and Asia. This puzzle is particularly compelling because it is nested within the larger historical questions of why Western Europe experienced a unique trajectory of rapid economic development and how the relationship between Europe and Asia came to shift so rapidly in the eighteenth and nineteenth centuries.